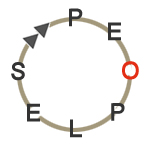 Organized governmental services include traditional legal and security services such as police, emergency, and fire departments and increasingly, the military. In this dimension, we also include the services provided by public health and hygiene departments as well as cultural heritage departments. Each of these organized government services plays a key role in sustaining communities both before and after extreme events. A good example of the necessity of a well-functioning government may be seen in the devastating January 12, 2010 earthquake in Haiti. In the aftermath, the news media reported a lack of government services and orderly control, and a general perception that the government is not in a position to help its people (Schwartz, 2010). In contrast, the Darfield earthquake in New Zealand was followed by quick response on the part of local, territorial, and national government services.What do we measure

Are you a stakeholder? Join us to make your community resilient!